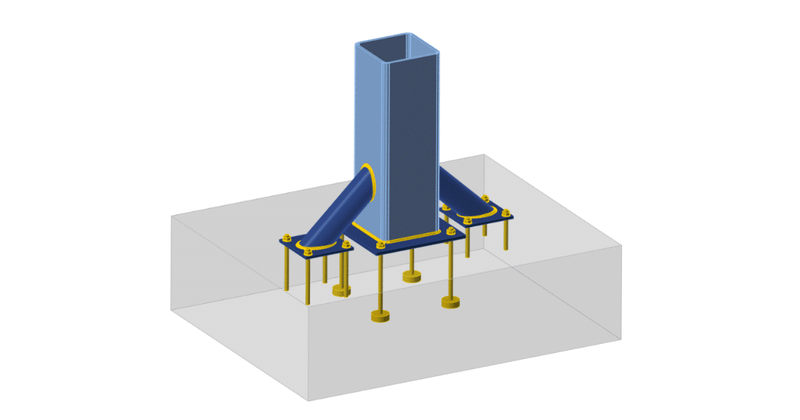 Find out some tips and tricks on how IDEA StatiCa can help you with the quick and effective design of steel footing according to the code.

According to the engineering experience, with the right selection of software tools, the design time taken for one individual connection is slashed by an average of 50%. Based on our own research on more than 600 structural engineers who filled in data in our Effectivity Calculator, the time cut-downs on very complex connections can reach even 80%.

All according to the code, but which one?

When the Eurocodes were first developed, the anchoring design was not established well enough to warrant inclusion within the EN design standards. Mostly, they were covered by ETAG 001 developed by EOTA (European Organisation for Technical Assessment), including 2 key annexes – C and E.

For the benefit of the design engineer, all these design guidelines are now merged under the new design document EN 1992-4, which is now an enforceable design standard in countries under the EN umbrella, with adoption nearly complete. However,  the core of EN 1992-4 carries over many of the design provisions of ETAG 001: Annex C, TR 029, and TR 045 and, as such, differences are limited.

But EN is not the only standard covered by IDEA StatiCa. See the chart below with all codes included in IDEA StatiCa for anchoring.

The other codes supported by IDEA Statica (China, Hong Kong, Russia, India) do not have a direct prescription for anchoring design. Check of concrete in compression is covered for all codes.

How IDEA StatiCa satisfies AISC/ACI, Eurocode, and others

The CBFEM method gears the two of most powerful software for anchoring design, IDEA Statica and PROFIS Engineering Suite by Hilti. CBFEM is convenient to simplify the concrete block as 2D contact elements. Here are some principles on how IDEA StatiCa deals with steel-to-concrete models:

If you would like to know more about the most important principles and procedures used in CBFEM, we strongly suggest going through our General theoretical background.

In our theoretical background, you can find also how IDEA StatiCa treats the steel-to-concrete connections form the point of view of code-specific requirements.

For other national standards check our Support center.

3 ways to model a steel-to-concrete connection

OK, enough theory, let’s play! When it comes to design possibilities, it does not really matter what type of anchoring connection you need to model and calculate. The flexibility of IDEA StatiCa enables you to model column bases, balustrades, railings, or rod anchorings without any limits in topology.

You can model your connection in three different ways.

The first approach is modeling the connection using our connection wizard. Here, you can take advantage of four different topologies with the design possibility of a moment or shear connection choice. 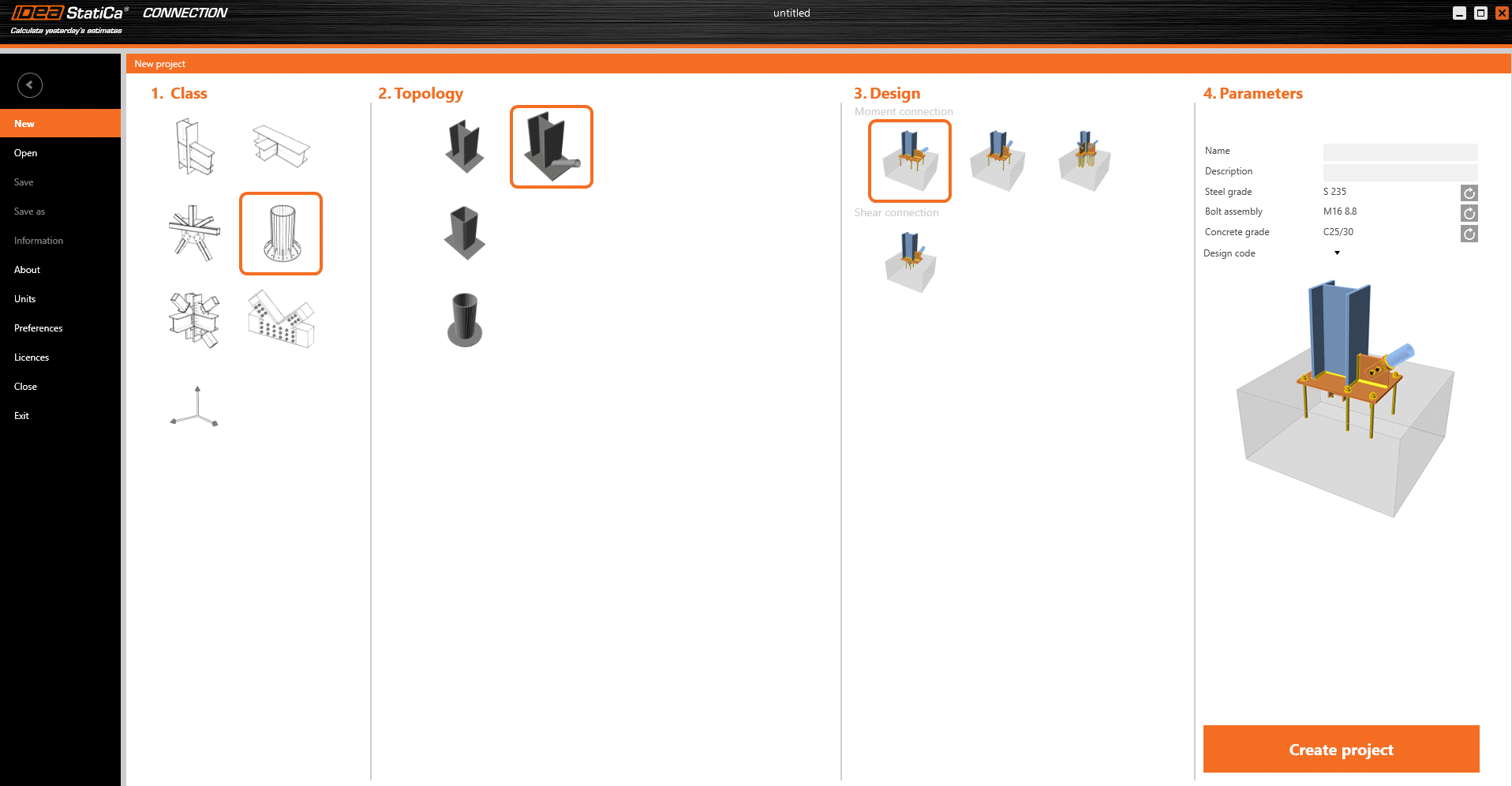 You don’t have to be afraid of design limitations in the wizard. The possibility to choose from a vast amount of materials and manufacturing operations allows you to spread your wing of imagination and design art.

In some cases, you need to start designing your connection from scratch. Even in this case, you do not have to be afraid of complicated processes. Most of your anchoring details you would be able to design in minutes.

See how to design a steel-to-concrete connection in less than 3 minutes.

Last but not least, you can import your anchoring model from your CAD software using our BIM links. For Autodesk products – Advance Steel and Revit, the concrete blocks are imported within the model. For Tekla Structures, you have to use a workaround to overcome this limitation.

You can use the BIM link from FEA software as well, in such case you just have to be prepared to model the concrete block in IDEA StatiCa directly.

IDEA StatiCa covers all the necessary base plate checks, the majority of checks for concrete and anchors. IDEA StatiCa does not cover checks all the checks of post-installed anchors. The reason is missing information, e.g. shear resistance of glue of bonded anchors or splitting force of torque-controlled fasteners. For this, you have to use specialized software. Here, the suggestion is pretty simple – the only one using CBFEM  is PROFIS by Hilti.

In the past, we met very often with the requirement of checks for partially Supported base-plate IDEA StatiCa was not able to deal with. Since version 20, this missing check is available. 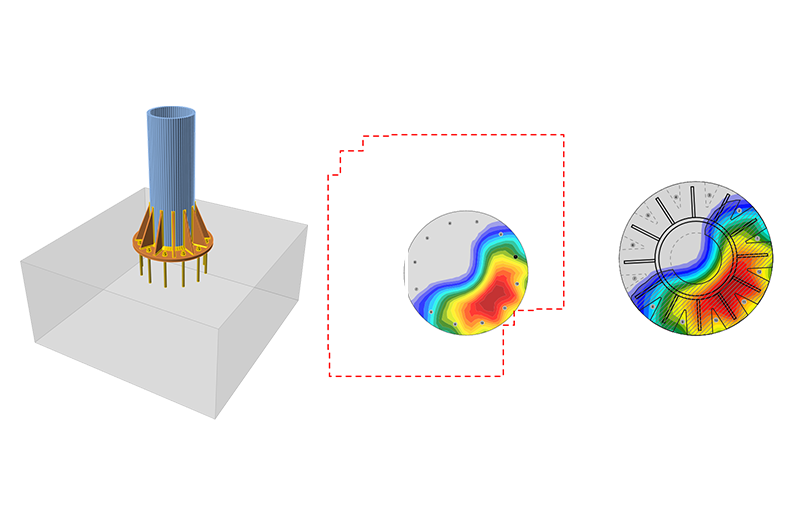 Be safe, save time, optimize!

Designing steel-to-concrete connections can be a very time-consuming and demanding work but the right tools set the can decrease the amount of work rapidly. That is why the calculation of steel footing connections on a concrete block is one of the most used and required features in IDEA StatiCa. If you would like to check how IDEA StatiCa can help you to design anchoring quicker and more efficiently, you can try it for 14 days for free.

Anchoring is also one of the topics covered most often in our webinars. The recordings are available in our Support Center.